Fritz Kahn (1888-1968), a German, Jewish gynecologist, artist, and popular science writer extraordinaire, is considered by many to be the founder of conceptual medical illustration.

Fritz Kahn had his own mission to educate the public on the human body, something he took very seriously. The success of his textbooks at the time was a combination of a lucid style of writing accompanied by captivating visuals portraying the body as a machine complete with

factory workers
switchboards
assembly lines
pipes
wires
pressure valves
pumps
In his piece entitled Man as Industrial Palace (below), you can clearly see the hierarchy of departments within the body factory, with the center of operation located at the top of the head. 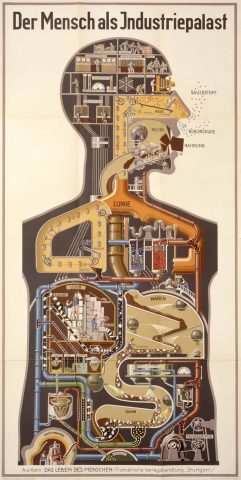 By illustrating the body as a factory, Kahn was able to relate the body’s complex organic interior to the industrialized space so common in society during that period. Kahn was part of a visual education movement that came with developments in color photography, motion pictures, animation, and artful printed graphics used as a revolutionary way of instructing. It was a movement to help popularize science and medicine. Kahn used all of these mediums in his work to show how the body functions.

A wonderfully detailed, and illustrated article about Fritz Kahn has been posted to the Fluxlist Blog by Litsa Spathi.

I highly recommend it!