Jackson Mac Low (September 12, 1922 – December 8, 2004), an early affiliate of the original group of Fluxus artists that surrounded George Maciunas, held distinction as being the first “poet of Fluxus”. While many Fluxus artists incorporated (and incorporate) text and visual poetry into the work, Mac Low was the first whose primary creative output was based in poetics. He was one of the key progenitors of mid-century chance operations for artistic creation output.

In a 2014 exhibition at MoMA Mac Low was featured in The Poetry of Silence: Jackson Mac Low’s Drawing-Asymmetry 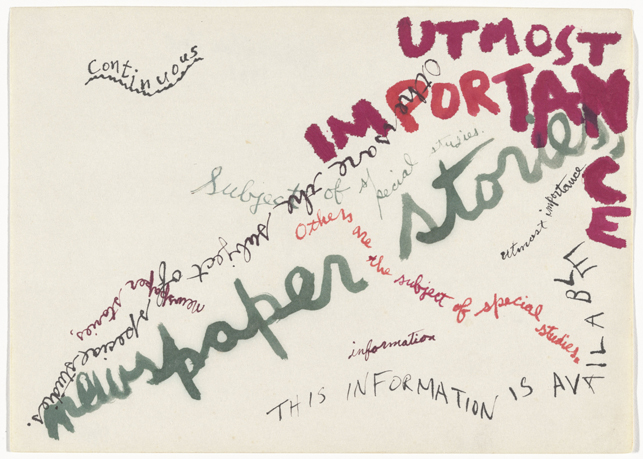 In an excerpt from the exhibition text, Jordan Carter writes,

In 1960, one year prior to beginning the Drawing-Asymmetry series, Jackson Mac Low collaborated with John Cage and Judith Malina to direct a chance-based theater piece for The Living Theatre. The play, A Marrying Maiden, was comprised of text sourced randomly from an existing classic. Mac Low added to the dynamism of the spectacle by distributing an “action pack” of 1,400 instruction cards among the performers. Like with the Drawing-Asymmetry series, the lines and commands that structured A Marrying Maiden deconstruct and reconstruct language, employing alternative syntaxes that are equally surprising for the director, performers, and listeners. In the early 1960s, Mac Low’s poems and theater pieces were performed at Malina’s the Living Theatre, Yoko Ono’s Chamber Street Loft, and Fluxus founder George Maciunas’s AG Gallery.

Mac Low lamented, however, that Maciunas never adequately integrated poetry into the scheme of the Fluxus oeuvre…

The complete article by Jordan Carter is available on the MoMa website here.

Fuxus: Just Getting to Know You

It seems as though nearly everyone I meet, who isn’t “into” Fluxus, doesn’t know much about Fluxus. I.E/ They’ve never heard of it!

I’ve come up with these four commonalities that encompasses most Fluxus work , and most of the Fluxus Philosophy.

You can also go to Wikipedia to get a bit more of the basics.
Fluxus on Wikipedia

Better still, buy and read one or more of these books.