Change at the Digital Salon

The Digital Salon family of web sites has been consolidated into a single site, here at http://www.DigitalSalon.com

The old Digitalsalon.com site is now retired, and my own work now resides on sub-pages of the Digital Salon Fluxus Blog.

I hope that you take the time to click through the menu links.

Artist and musician, La Monte Young, has been to avant garde music what Ray Johnson was to Mail Art. He was influenced by John Cage, but went on to create his own highly influential oeuvre.

When he wrote Trio for Strings, he was still a starving artist eating mustard sandwiches to survive. According to Young [he] “bought the bread and stole the mustard,” On September 3, 2015 Young will present the original full-length version of Trio for Strings at Dia. He considers it to be a world premiere, as when it premiered 57 years ago he agreed to shorten it for presentation. A decision he regrets.

Young isn’t interested in temporal popularity; he believes his music will be exalted, because it leads toward enlightenment. 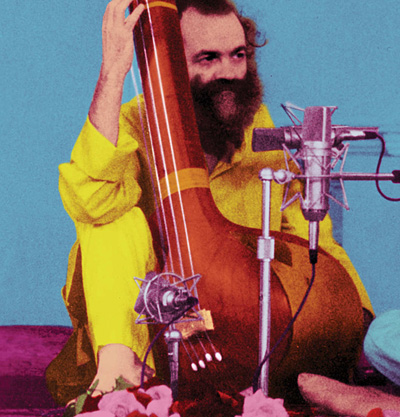 La Monte Young has a different relationship to time from the rest of us. His music goes on for a long time — that’s objectively true, and it feels even longer if, like many people, you find it boring. He’s credited as the vastly influential father of minimalism because when he was 22, in 1958, he wrote the first piece that held notes for a long period, suspended in air to allow examination and contemplation. His best-known work, The Well-Tuned Piano, is a solo performance that has grown in length from three and a half hours to five to, last time he played it, nearly six and a half. (It would have been longer, but he rushed a few parts.) When he was young, Young shocked Karlheinz Stockhausen by strolling in two hours late for the intimidating composer’s morning composition class in Darmstadt, Germany. For some time, Young lived on a weekly cycle of five 33.6-hour days. Lately, he stays awake for 24 hours, and then rests for 24.