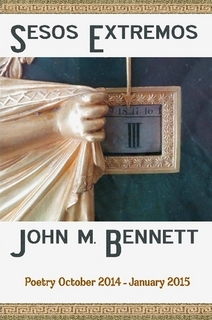 After having read John M. Bennett’s poetry almost daily for 20 plus years, you would think I would have something very definite to say about it, but if there’s one thing I’ve learned from reading it all these years, is that things can change in an instant. At first you think some of the pieces you’ve been reading are hardcore concrete poetry, poetry of and maybe to the physicality of words, of expression, the mechanicality or instrumentality of thought, but then that year, you happen to meet or watch a performance by John and you’ve got the book in your hand, and suddenly you realize that a certain percentage of the poems, or even of any given poem, might suddenly become a very succinct notation for performance, an agile, well oiled vocal performance where some strange fog is playing the ‘john-horn’ or its fog suit avatar. In short, that the poem was made as such for a specific purpose (in one sense), but also that it is still concrete poetry, or it’s concrete sound poetry mapped to a visualization, and its functionalization as such is also visually important because it realizes a unique cultural production which is both solipsistic and immensely social and referential.

There are the collaborations, the works inspired by travel and friendships, poems in Spanish and French, and an engagement with the entireties of several avant-garde traditions and anti-traditions. There are hacks, riffings, homages, fever dreams, and obsessions galore! Like an oozing tarantula of snapping human jawbones carved from Olmec jade, or the Zapotec lightning amoeba Cocijo, the poetry of Dr. Bennett works its way into the crannies of your soft green brain, it sticks on your neck like a stain inspecting the muddy blowhole you call a mind. It’s literary peyote, both sacred and profane, but also scared because it’s making propane in the cave and the only light there is from an illuminated turtle language (with fire legs in its shirt) and there’s some gelatin left over which is already living in a bowl on your mantle and it has its own flag, the stone hand, ALTO! who knows how it got there, John may have picked it up on his shoe in the jungles of Mexico riding with the revolutionaries until they got lost, or found.

In short, John M. Bennett is a national treasure and an international man of mystery. Is he a mild-mannered librarian or a fluxist master? Is he camping in a hole full of beans? Possibly. Whatever it is he’s doing, he’s doing it just fine and will probably continue to do it, no matter what we think.