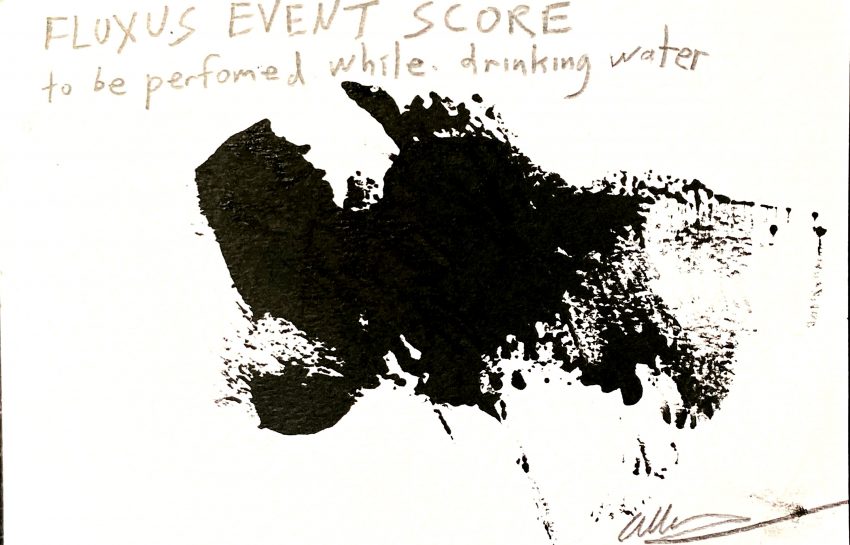 The microcosmic universe that is Fluxus is famously conflicted about what is, and what is not, “Fluxus”. There exist however a couple of Fluxus sub-genres that are universally accepted as being representative. The first is the Flux Box (or Fluxkit), first assembled by Fluxus co-founder, George Maciuanas. The other is the Event Score.

The Fluxus Blog first looked at Event Scores back in January of 2009. Today, at the end of 2021, contemporary Fluxus artists are still writing and performing new scores, and performance artists around the world are still performing scores by the original group of Fluxus artists. Because of their continuing relevance, I thought that a follow up article would be helpful to further understanding this important element of the Fluxus oeuvre.

The Event Score traces its beginnings to George Brecht, a chemist born George Ellis MacDiarmid, whose laboratory was close to Rutgers University where the artist Robert Watts was teaching. Brecht and Watts met regularly to talk about art and the directions that art might take in the future. From these conversations, and meetings with John Cage (with whom Brecht studies) and Allan Kaprow, the idea of the Event Score was born in the mind of George Brecht. In fact Brecht’s invention of the Event Score actually predates the formal birth of Fluxus by several years. Eventually of course, in the early 1960s, Brecht (along with Robert Watts) fell into the orbit of Maciuanas, forming an important part of the seed that germinated into Fluxus. Other early Fluxus artists for whom the Event Score was particularly important include, Yoko Ono and Ken Friedman. Ono, who sometimes collaborated with here husband, John Lennon of the Beatles, wrote a fabulous little book of “thought scores” titled Grapefruit. Ken Friedman, who first joined Fluxus as a 17 year old college student, wrote several of the earliest Fluxus scores. Friedman also assembled nearly all of the scores produced by the first group of Fluxus artists into the freely downloadable Fluxus Performance Workbook.

The original group of Fluxus artists largely disbanded after the death of George Maciuanas in 1978, though many Fluxus artists associated with Maciuanas continued creating Fluxus work, and writing Event Scores. Fluxus co-founder, Dick Higgins, along with his wife, Alison Knowles continued keeping the Fluxus flames burning until Higgins’ sudden death in 1998. Alison continues to perform her scores to this day.

While the original group of Fluxus artists have mostly gone their own ways, or simply passed away, the Fluxus Event Score, has managed to persist. Contemporary artists and several groups of art students around the world continue to keep the old scores alive and relevant through performances. More importantly, several contemporary Fluxus artists, most of whom were not associated with Maciuanas, are still writing and performing new scores. One such artist is Bill (Picasso) Gaglione, the “godfather” of rubber stamping and its association with Fluxus and Mail Art. Other contemporary artists writing and performing new scores include Allan Revich and Grant Guy in Canada, Bibiana Padilla-Maltos (Mexico and USA), and Allen Bukoff (USA). In Argentina, Ana Montenegro and Silvio De Gracia are at the centre of a thriving contemporary performance art scene.

Fluxus Event Scores in the 21st century continue to evolve. In addition to writing and performing his own scores, Keith Buchholz of St. Louis, MO, was instrumental in organizing a new series of important contemporary Fluxfests (Fluxus performance festivals). First in New York City, then in Chicago. More recently Allan Revich organized a Fluxfest in Toronto Canada, and Bibiana Padilla Maltos organized two Fluxfests in Los Angeles. Picasso Gaglione, a contemporary of many of the first generation of Fluxus artists, continues to produce exciting new performances. Allan Revich has incorporated asemic/non-semantic (visual non-referential) instructions into his newest scores. Other artists such as Grant Guy are incorporating elements of new media and social media into their events. Bibiana Padilla-Maltos has expanded on the proto-feminist work of Alison Knowles, adding a feminist perspective to contemporary Fluxus Event Scores. Her Memory Game, played with a loaf of bread, (first video below) being a prime example.